129 visitors are looking for this product right now!
Inform me when the item arrives

COQ10 is a natural supplement that can be found in many foods, including meat, fish, and beans. It is also available as a dietary supplement from Feel Younger®

126 visitors are looking for this product right now!

129 visitors are looking for this product right now!
Inform me when the item arrives

COQ10 is a natural supplement that can be found in many foods, including meat, fish, and beans. It is also available as a dietary supplement from Feel Younger®

123 visitors are looking for this product right now! 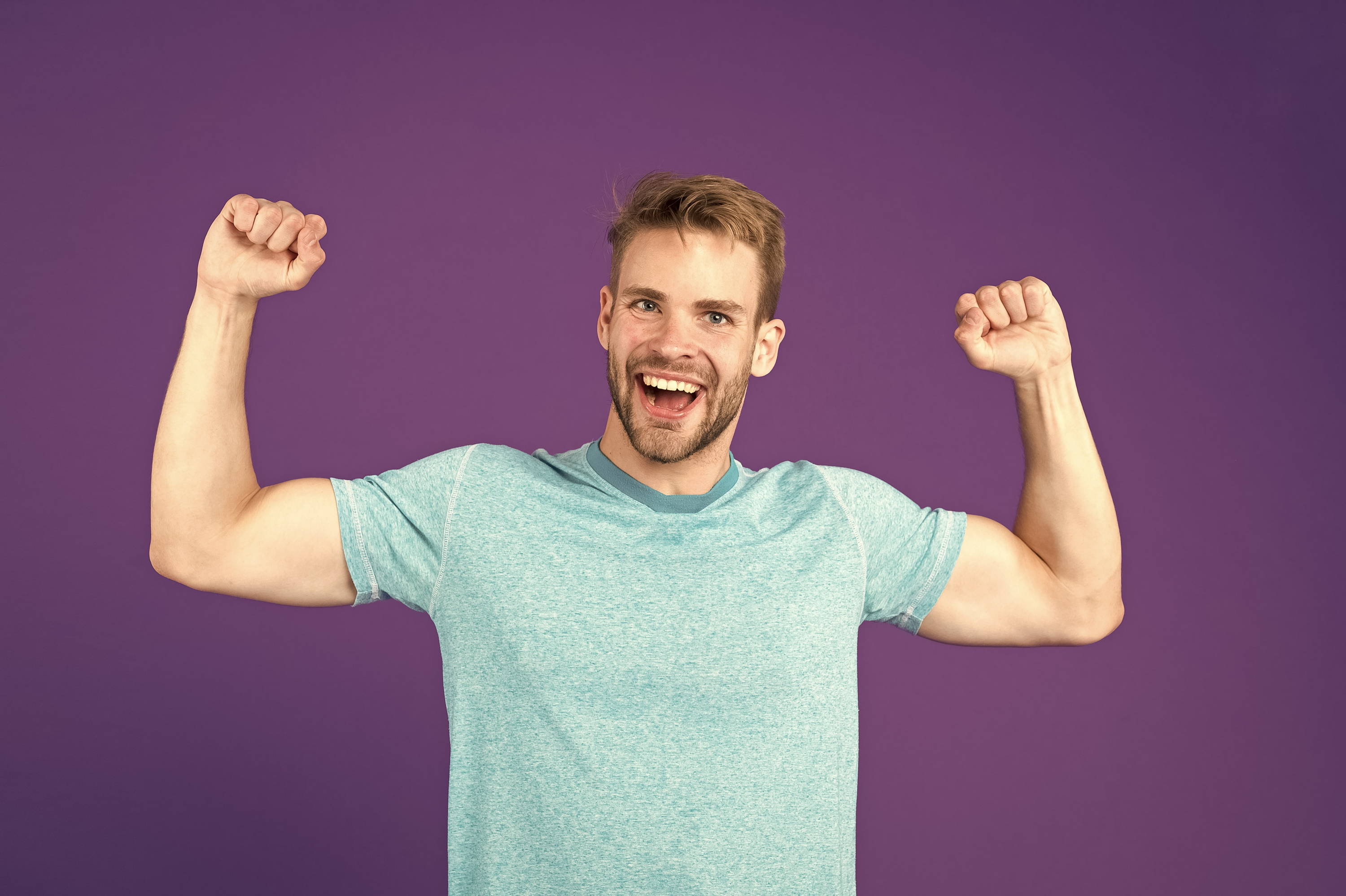 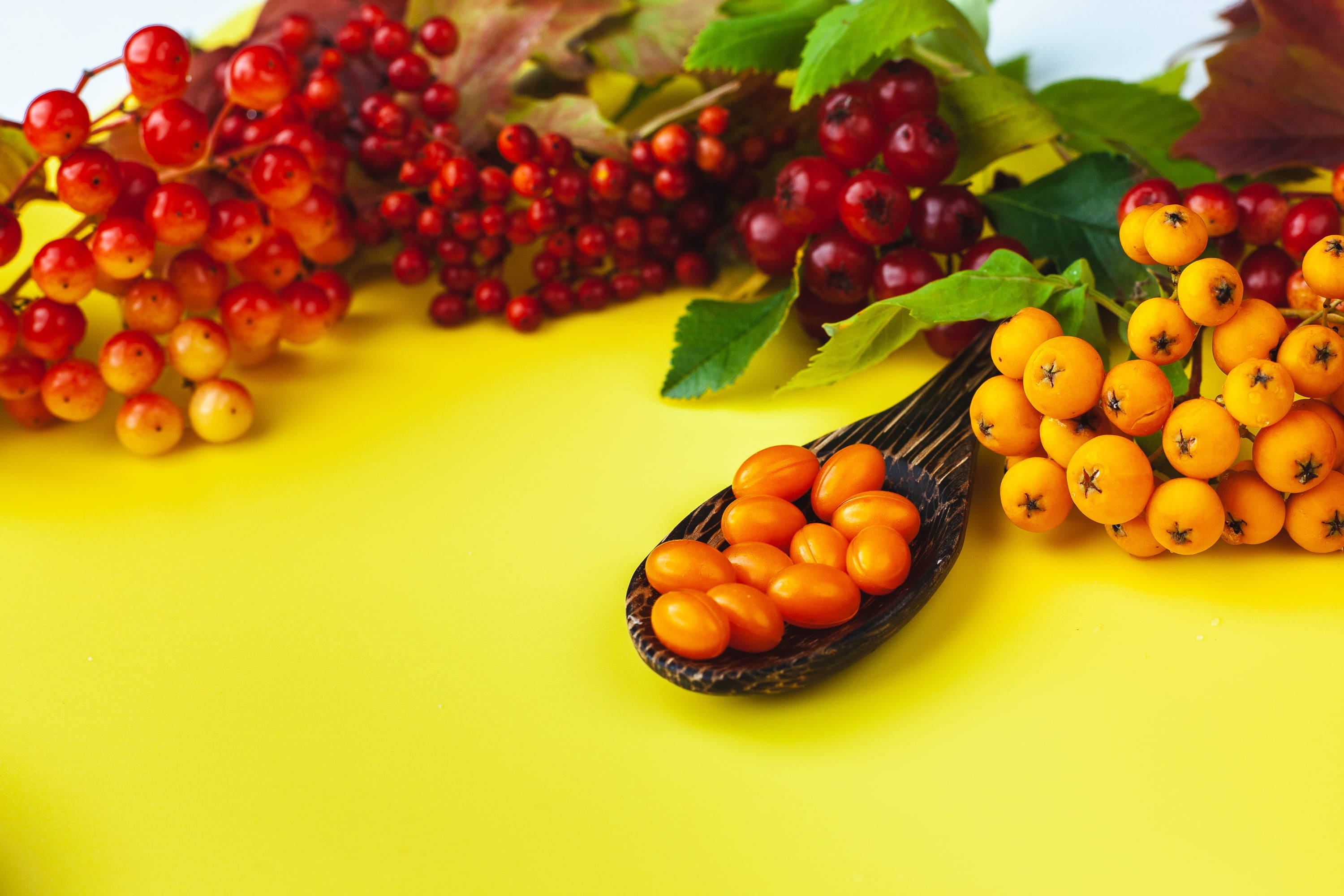 If so, you may want to try Co Enzyme Q10, also known as Ubiquinone.

Co Enzyme Q10 can potentially help with all of these problems,

as well as having other benefits such as:

Coenzyme Q10 (CoQ10) is a key compound found in all cells in the body. It is a coenzyme, which means it helps enzymes work more effectively.

Coenzyme Q10 (CoQ10) is a key compound found in all cells in the body. It is a coenzyme, which means it helps enzymes work more effectively.

How does CoQ10 work?

CoQ10 is mainly found in the membrane of mitochondria, where it is used to make energy [1]. 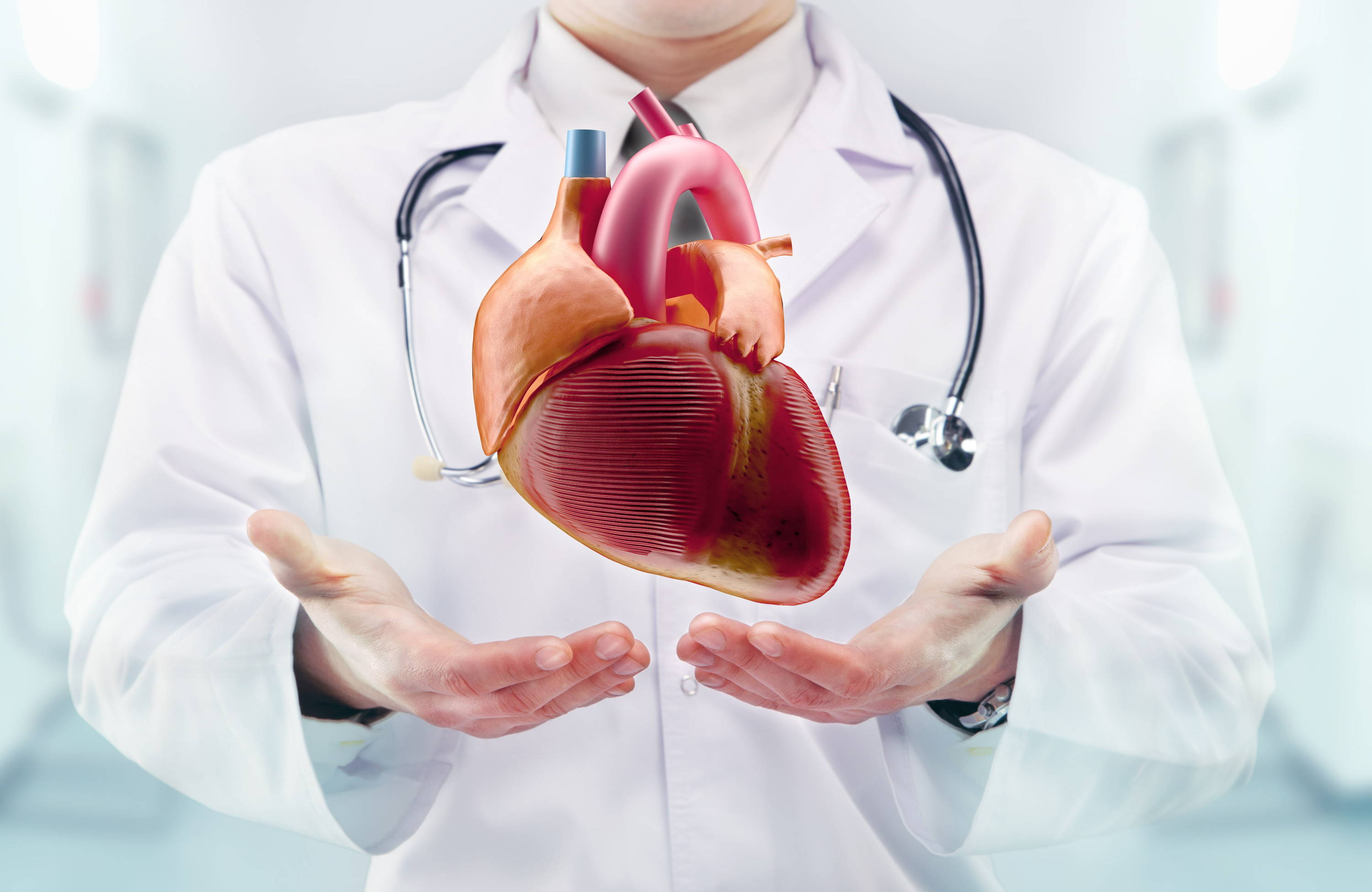 People mainly use CoQ10 to:

Energy-demanding organs in your body such as the brain, heart, kidneys, muscle and liver have the highest levels of CoQ10 all of which contain many mitochondria and use a lot of energy [11].

Abnormal mitochondrial function can cause calcium uptake to be increased by cells, free radicals to be excessively produced, and a decrease in antioxidant protection. This can result in low energy in the brain cells and can even cause migraines [12]. 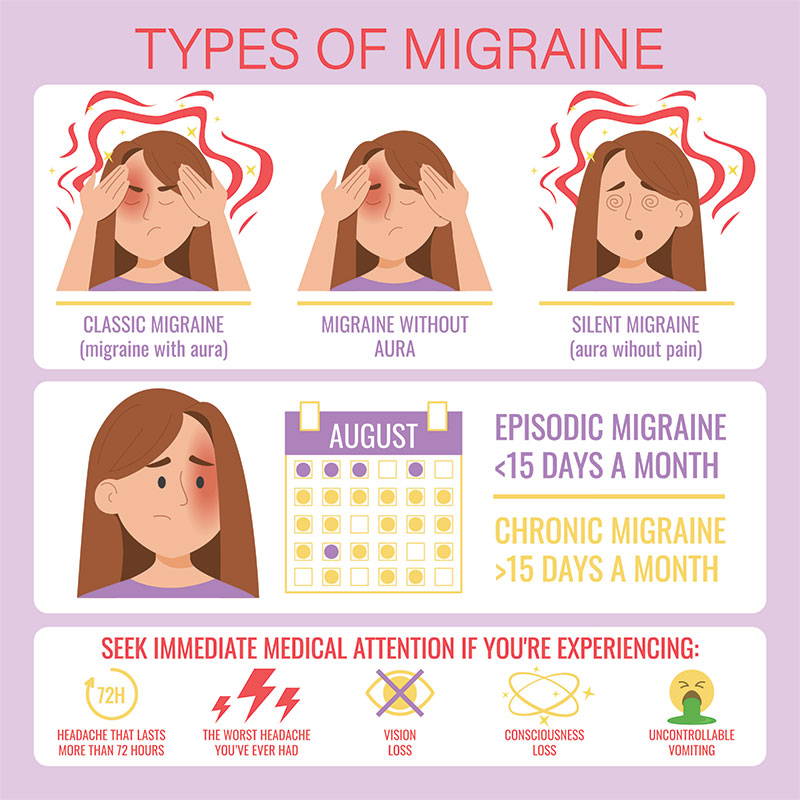 Since CoQ10 is largely found in the mitochondria of the cells, it has been shown to improve mitochondrial function and help decrease the inflammation that may occur during migraines [13].

A study showed that CoQ10 supplementation was three times more likely to reduce the number of migraines than a placebo in 42 people [14].

Additionally, CoQ10 deficiency has been observed in people suffering from migraines.

A larger study showed that 1,550 people with low CoQ10 levels experienced fewer and less severe headaches after treatment with CoQ10 [15].

Furthermore, it seems that CoQ10 can not only help treat migraines but may also prevent them [16].

CoQ10 can help exercise performance by decreasing oxidative stress in the cells and improving mitochondrial functions [19].

In fact, one study investigated the effects of CoQ10 on physical activity. Those supplementing with 1,200 mg of CoQ10 per day for 60 days showed decreased oxidative stress [20].

Furthermore, supplementing with CoQ10 can increase power during exercise and reduce fatigue, both of which can improve exercise performance [21]. 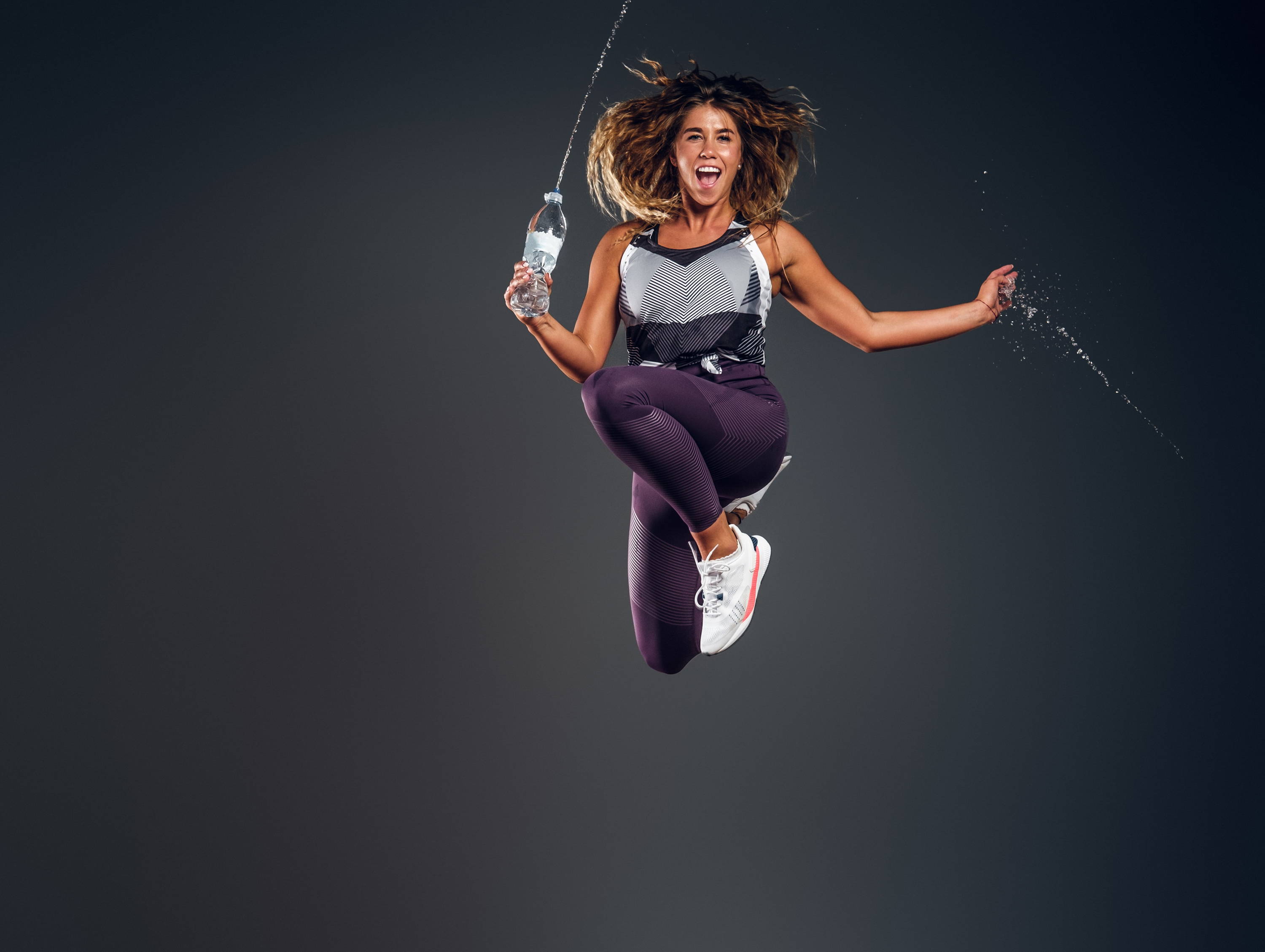 The brain is very susceptible to oxidative damage due to its high fatty acid content and its high demand for oxygen.

It is this oxidative damage that enhances the production of harmful compounds that could affect memory, cognition and physical functions [22].

CoQ10 may help reduce these harmful compounds build up in the brain.

CoQ10 (100 – 320 mg/day) improved exercise capacity in patients with heart problems by increasing the ability of the lungs and heart to deliver oxygen to muscles [23].

Out of all of your organs, your lungs have the most contact with oxygen, which makes them extremely susceptible to oxidative damage.

Increased oxidative damage in the lungs and poor antioxidant protection, including low levels of CoQ10, make it more likely for lung issues such as asthma and chronic obstructive pulmonary disease (COPD) to occur [24].

Furthermore, it has been shown that people suffering from these present lower levels of CoQ10 [25].

A study showed that supplementing with CoQ10 helped reduce inflammation in people who had asthma, as well as their need for steroid medications to help treat it [26].

Another study showed improvements in performance during exercise in COPD sufferers. This was observed through better tissue oxygenation and heart rate after supplementing with CoQ10 [27].

How do you know if you would benefit from taking Co Q10?

Various issues, including nutrient deficiencies, reduce the body’s ability to make CoQ10 or cause CoQ10 to be used up faster than it can be replaced. In these cases, supplementation can be helpful or may even be necessary [28].

While it’s not a very common test, you absolutely can do a blood test to see if you have optimal blood levels of Co Enzyme Q10, and thereby you can deduce if you would potentially benefit from supplementing Co Enzyme Q10. 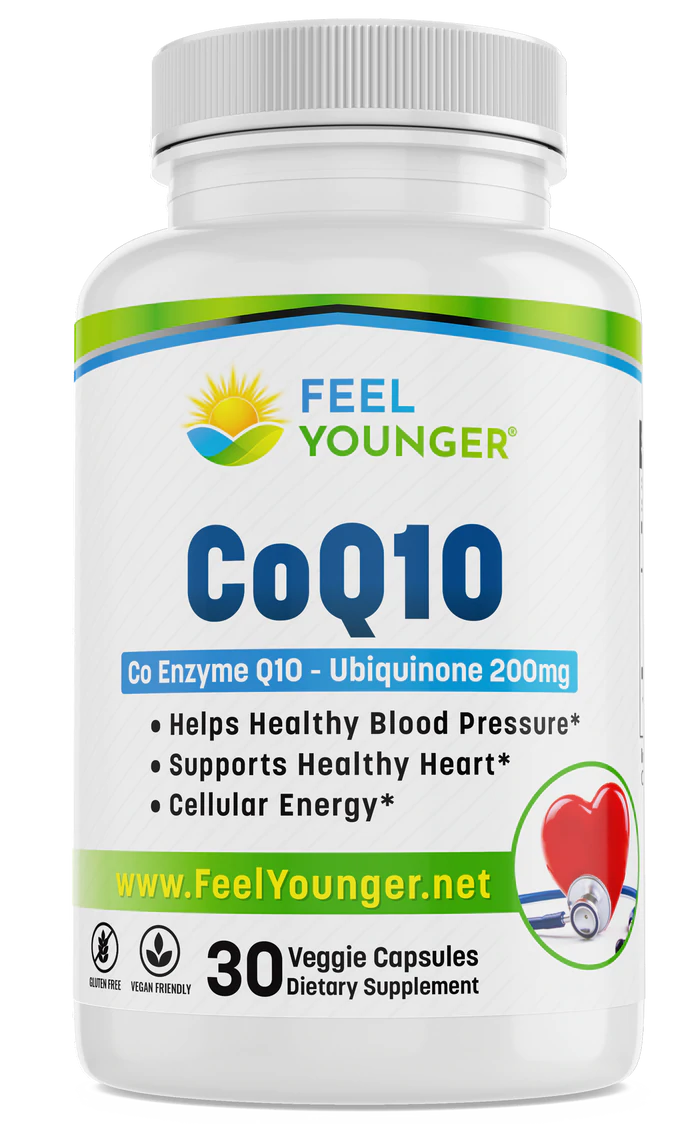 Our CoQ10 capsules are high quality, high purity, all natural, vegetarian and vegan friendly and contains no nasty fillers or binders.

Here at Feel Younger, we believe in providing strong doses at reasonable prices. Our Co Enzyme Q10 capsules provide a 200mg dose per capsule, and will cost you no more than $35, with discounts available on subscriptions for multiple bottles.

Take one capsule a day. CoQ10 is fat soluble, so it should ideally be taken with a meal containing fat so your body can absorb it.

Taking CoQ10 before you go to bed may cause insomnia in some people, so it's best to take it in the morning or afternoon.

CoQ10 supplements can interact with some common medications, including blood thinners, antidepressants and chemotherapy drugs.

Avoid using ubiquinone together with other herbal/health supplements that can also lower blood pressure.

ALWAYS consult your doctor or pharmacist before taking CoQ10 supplements, especially if you are on any medications. 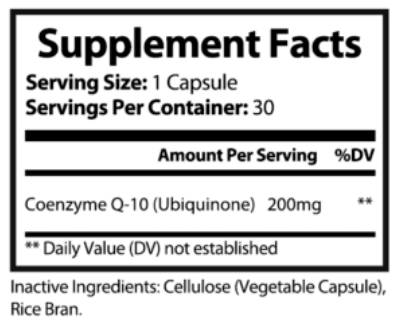